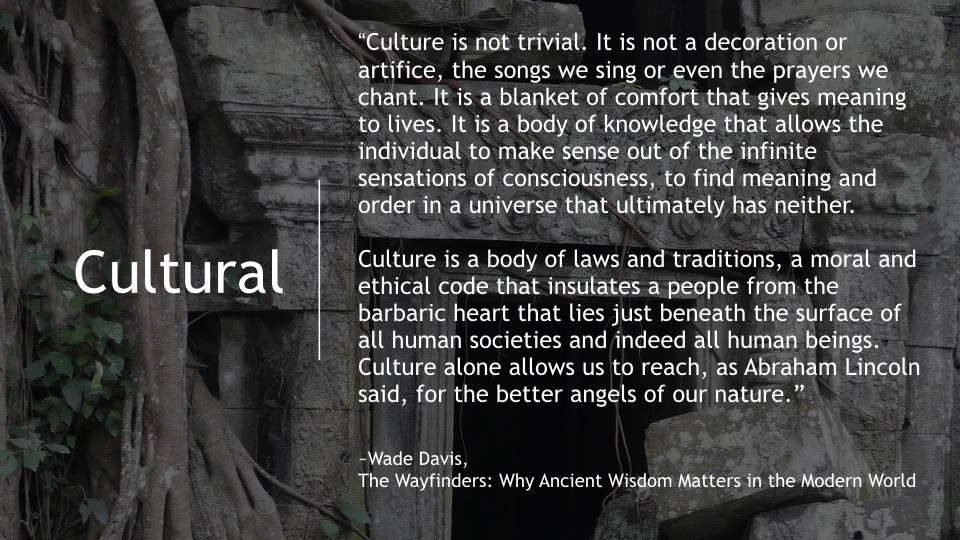 In the same way that pristine nature and gorgeous landscapes are often marketed and sold to tourists, ‘exotic’ cultural experiences are also being sold and commodified for the benefit of tourists. Before you book an experience, stop and consider if it truly is authentic, or even benefits the local people.

Cultural tourism is the most common draw for most worldschoolers. Through different cultures, we learn about others and ourselves. Although cultural tourism provides opportunities for deeper understanding and learning, there are serious impacts that arise as a result. In addition to the ecological impact on communities that live in popular tourist destinations, the types of social interactions that occur between tourist and host affect the nature of the culture itself.

There are three broad effects at the local level that can be recognized: cultural commodification, the demonstration effect, and the acculturation of another culture. 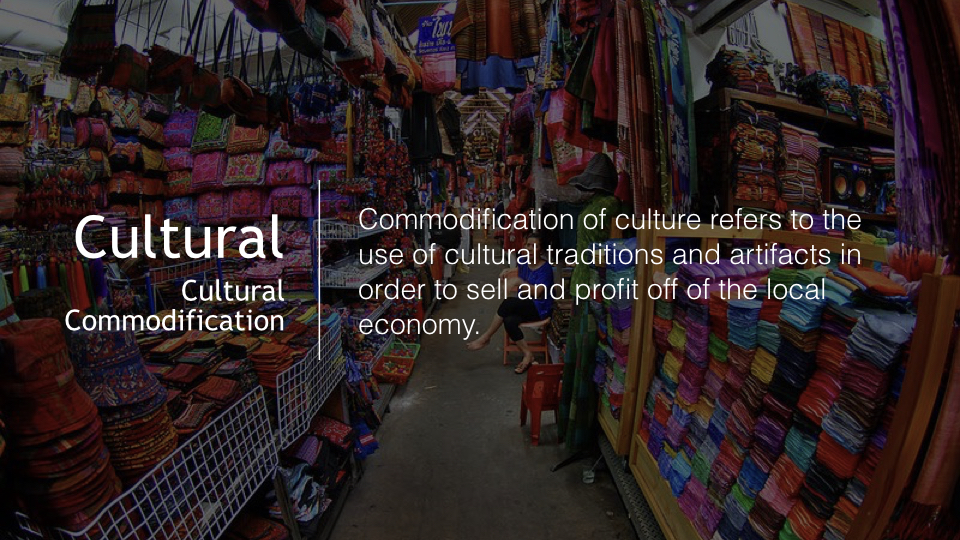 Commodification of culture refers to the use of a cultural traditions and artefacts in order to sell and profit off of the local economy. Tourist boards and tour agencies do this sort of marketing, promoting a Disneyland approach to a packaged ‘cultural experience’. We have even seen the internal cultural commodification filter into unconscious cultural appropriation back in our own home countries.

One positive is the creation of business and jobs for local craftsmen, who are able to sell their goods to tourists. Rural tourism is seen by many people as a ‘cure’ for poverty and leads to the improvement of transportation and development of telecommunications in an area. For the tourist, commodification creates an interest for traditional arts and social practices.

Many researchers look at the impact of tourists on a culture and argue that the contact with the secular West leads to the destruction of pre-tourist cultures. In addition, the ‘development cure’, the idea that increasing tourism will spur economic change while strengthening local culture, is claimed to lead to new societal diseases, such as “drug addiction, crime, pollution, prostitution, and a decline in social stability” as well as growth of capitalist values and a consumerist culture. And it’s not just outside tourism that is responsible for this, it’s western education being imported and imposed through governments in developing nations as well.

It’s a complex issue, and on a side note, we recommend examining the effects of cultural commodification through education in the film, Schooling the World, the White Man’s Last Burden, by Carole Black.

Is cultural commodification just a normal side effect of globalization? Do we ‘ethically’ refrain from traveling because of the consequences? If it’s out of our control, do we just act as if it doesn’t exist? Is there anything we can do to stop it?

These are all questions that we don’t have answers to, and each person with their varying worldviews may respond differently. However, it’s our obligation as worldschoolers, if we do choose to travel, to be aware of these questions. We need to ask ourselves these hard questions every time we make a choice to travel. 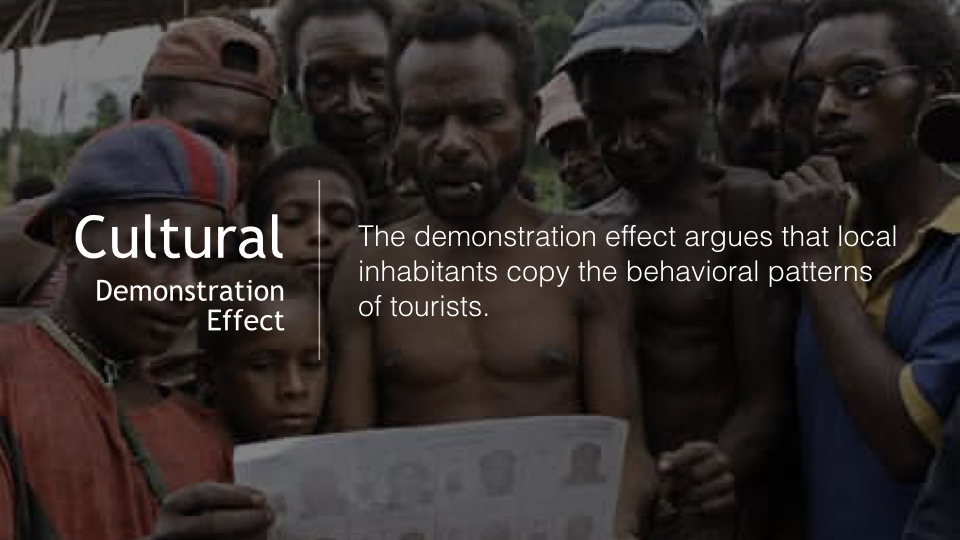 The demonstration effect examines how social influences from tourism affect local communities. The demonstration effect argues that local inhabitants copy the behavioral patterns of tourists. To be fair, we’ve read several academic papers while researching this topic and there are arguments for both the existence of this concept and many papers we read that refute its validity based on a lack of empirical evidence to support it. Either way, the demonstration effect has become a well-established concept frequently referred to in the literature on tourism, so therefore as worldschoolers, it’s important to consider it nevertheless.

This is from a paper written called Tourism and the Demonstration Effect, authored by J. Carlos Monterrubio as first author in 2014. The statement reads:

According to Burns, the demonstration effect refers to the process by which traditional societies, especially those which are particularly susceptible to outside influence such as youths, will voluntarily seek to adopt certain behaviours (and accumulate material goods) on the basis that possession of them will lead to the achievement of the leisured, hedonistic lifestyle demonstrated by the tourists.  Similarly, Moore states that the demonstration effect consists of host populations’ emulation of the behaviour and especially the consumption practices of the tourists who visit them. Moreover, this conception is reinforced by Reisinger, who claims that, as a consequence of the demonstration, locals notice the superior material possessions of tourists and wish to have the same. She also states that the demonstration effect often generates residents’ jealousy, resentment, and even hatred of tourists in developing countries when locals see they are unable to be as wealthy as tourists or have the same standard of living. By claiming that the demonstration effect is unavoidable, Murphy adds that tourists generally possess greater financial and leisure-time affluence than many locals, and tourists’ holiday experiences are based frequently upon conspicuous consumption.

Tourism has also been accused of affecting the social behavior of the younger members of our host communities, who may imitate what tourists do, impacting traditional value systems. Regardless of its accuracy, it is food for thought. 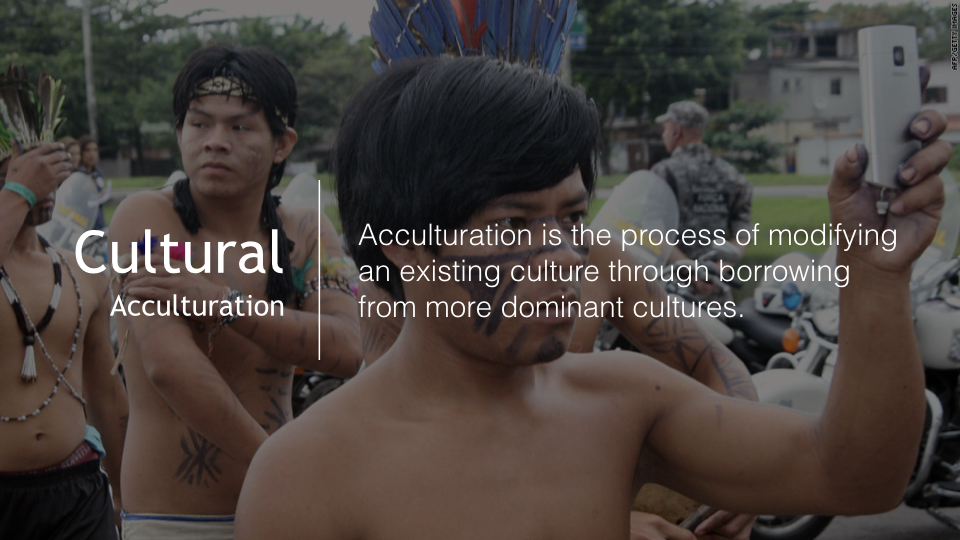 Acculturation is the process of modifying an existing culture through borrowing from the more dominant of cultures. Typically in tourism, the community being acculturated is the destination community, which then experiences dramatic shifts in social structure and worldview.

Societies adapt to acculturation in one of two ways. Innovation diffusion is when the community adopts practices that are developed by another group; whereas cultural adaptation is less adoption of a new culture and more the process of changing when the existing culture is changed.

Acculturation is often seen as a method of modernizing a community and there are many opposing views to the concept of modernization. One argument against modernization is that it contributes to the ‘homogenization of cultural differences and the decline of traditional societies’.

Understanding that ethics are a system of moral principles that define what is good for individuals and society, it’s impossible to know what’s good for a society that we, as worldschoolers, are outside of. Because there are no ethical codes in which all humans agree to, making choices based on a general code of ethics is near to impossible to achieve. Therefore, applying a process of ethical decision-making is imperative, especially while visiting different cultures.