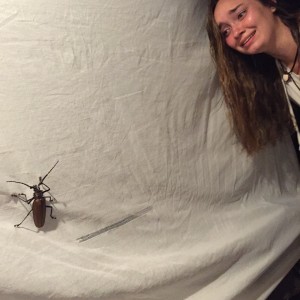 For anyone that doesn’t know me:

imagine the stereotypical “girl” character that freaks out around small beetles. Great, now you know how the Amazon bugs treated me. I don’t consider myself a bug hater, or an easily scared person. But the moment I got here and realized how big some of these bugs can be, I was freaked out. I will say though, we saw some really incredible ones! I loved seeing the fantastic colors and size of a lot of them, and learning all about what they do and how they help the environment. We saw lots of beetles and moths and butterflies and -pedes of all sorts. The spiders were large and built incredible nests; and even the snails were large and beautiful. But wow, I definitely was in over my head. We started a competition to see who could identify the most animals on the trip, and while Abigail had at least 50, I had 2 (and one of them was the cute guy at the office). Bugs, bugs, bugs!

And now, a word from our 12 year old entomologist:

The moment I realized I was actually going to the AMAZON JUNGLE(!) I Googled myself into a frenzy. What would be there? What was only found in the Amazon? What would totally kill me if I touched it? I was super excited.

After a few unsuccessful and disappointing web searches I decided that I wanted to find millepedes, centipedes, tarantulas, and Giant Land Snails. (Snails aren’t really insects but…) I would take pictures and then try to identify them.

After the Lima portion of our trip we finally arrived at the Amazon; where I soon discovered that finding the insects would not be the problem.

In fact they often show up uninvited, like on Katie’s mosquito net! She awoke to large beady eyes, razor sharp spikes and gnashing teeth, chewing on her net! It was a spiny lobster katydid, a large, colorful and aggressive insect that was about 3 ½  inches long. It was trying to get into her bed area for an unknown reason and that was absolutely terrifying  to Katie and fascinating to me. Was the net made of plant fibers? Did it have pheromones that smelled attractive to it? I may never know.

I handled a centipede, with hook like legs and thick armored plates; a vicious hunter of smaller insects; and its gentle cousin millepede, a detrivore.

The Amazon is a place where many legged spiders, shimmering beetles, delicate moths, and countless others make their home. I was just a visitor, coming and going, as they continued their lives in the beautiful place they called home.